Ok, ok, ok….. so normally I’m doing reviews. Reviews of decks that I already have in my sticky mitts. Decks that I can actually vouch for quality wise and handling wise…. 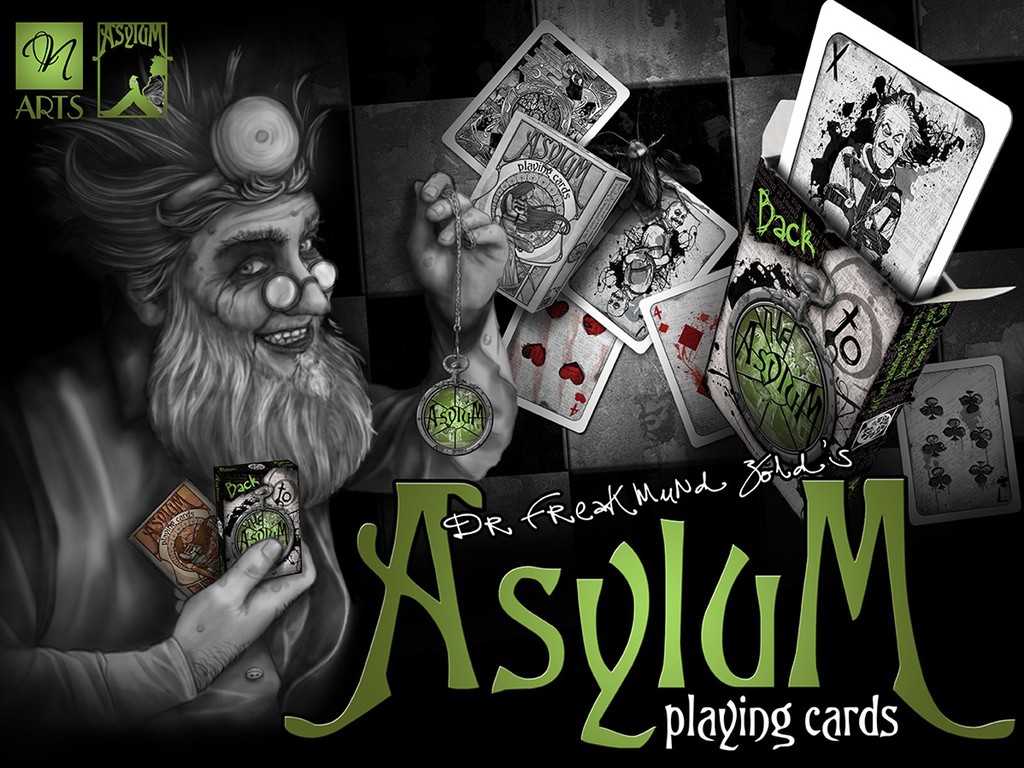 Back to the Asylum

These cards are too good to leave until I have them. I need to PREVIEW them now. This can not wait. The ‘Back to the Asylum’ deck of playing cards is being funded on Kickstarter AS WE SPEAK (early May 2015) and if you take my advice, you’ll get in on the funding before it’s too late. There’s nothing worse than sitting back, thinking “oh, well, I don’t know… what if it doesn’t get funded, or if it does and only just and I’m left holding cards that I have no use for….” JUST GET THEM!! Hey, listen… they’ve been made by inmates of an asylum. Out of whatever comes to hand… Old torn up newspapers… blood….. Come on… we’ve all done it…. no…..????? 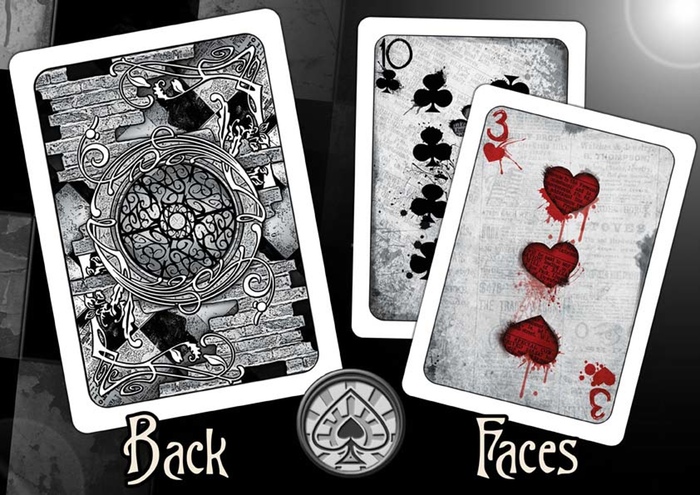 Back to the Asylum Backs and Faces

Ok, I’ve freaked you out quite enough (for now). But seriously. The idea behind this deck, I love. The imagery and artwork is perfect. The timing, actually, couldn’t be better. When Kickstarter has been promoting Earthy, Steely, Minimalistic, Sporty kinda decks, this one comes in and BAM!! hits you up the chops like you’ve never known before (and I’m challenging never will again). I’m going to liken this deck to Bicycle’s Dead Eyes deck for it’s eerie psychotic goriness. 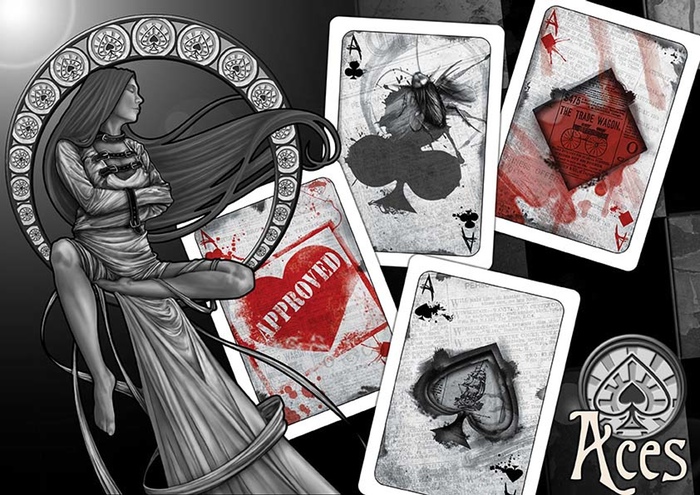 Back to the Asylum Aces

The Kickstarter campaign begins with the ominous words “Something old, something new, face the madness deja vu…” and we are invited into the dark world of Dr. Freakmund Zoid, head of The Asylum. As I’ve said, these cards have been drawn to make it look as if they’ve been made by the inmates themselves – from anything that they had at their disposal…. including their own blood for the Hearts and Diamonds pips. Roughly torn up newspapers form the background of the cards, squashed flies and ink splashes all go to give this deck an extremely rustic, raw and unrefined look to it. Even the inside of the tuck box is made to look like the walls of a padded cell. The characters chosen for the court cards are all recognisable from the silver screen – Sir Anthony Hopkins, Kathy Bates, a freaky clown, Vincent Price as a scary doctor, Jack Nicholson from The Shining and Marlon Brando as the Godfather wearing a straitjacket, are just a few. See who all you can recognise…. 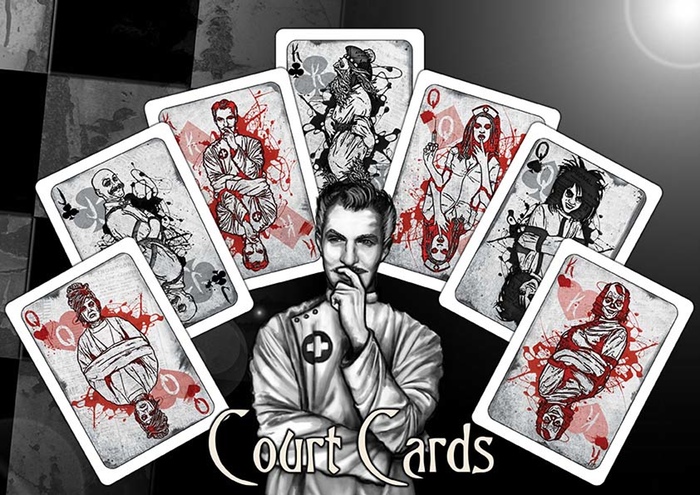 Back to the Asylum Court Cards

I’m excited about this deck. I like quirky. But not only that, I grew up in the whole original ‘horror movie’ generation. There was always a really scary movie based in an asylum, full of deranged characters sitting in a dark corner, swaying back and forth or screaming at the guards or the other inmates, trying to claw at them through the bars on their cell door with bruised and bloodied hands….. Great stuff :)

As this is merely a preview of this project I am unable, obviously, to give any kind of opinion as to the quality of the product. I’m very happy to have gotten in on the funding for the Asylum decks this time around, so how they feel, how they handle etc., I will have to cover in an update once I’ve received my decks and had a chance to play about with them for a while. 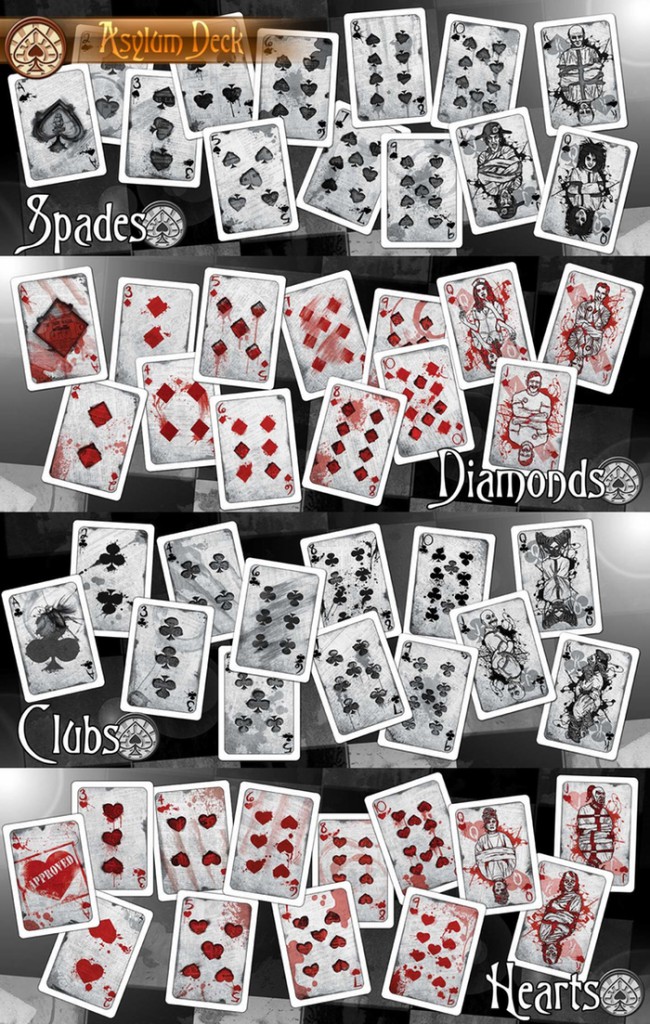 Back to the Asylum Pips

The long road back to sanity…..

‘Back to the Asylum’ is actually a re-launch of a deck – Bicycle Asylum Playing Cards – that was launched on Kickstarter back on 25th September 2012. The Serbian designer Milan Colovic had at that time teamed up with a certain Ed Nash of Altius Management to produce these cards. Each one was meticulously hand drawn – from the court cards to the pip cards and to the fantastic Jokers. The original target for funding was $15,000 USD but by the 5th October 2012 the project was fully funded, and in fact 810 backers managed to raise a total of $25,147 USD to ensure that this project went ahead.

But go ahead it did not. Milan was not paid for his work, the decks were never produced, money was never refunded to the backers and as far as Milan is aware, Ed Nash may or may not even still have all the original artwork. It literally died a death. Nash either refused to answer emails and questions from backers, or merely fobbed them off with empty promises that he never delivered on. It is widely accepted that this particular Kickstarter project was indeed a scam. Unfortunately for the backers of the original Asylum playing cards, Kickstarter have no kind of insurance or recompense for this kind of skulduggery. Many backers have queried this with Kickstarter only to be told “sorry… not our problem…” While this must be incredibly infuriating for the backers of that project, they do not blame the designer Milan Colovic. He was scammed just as the backers were. Nevertheless, the next 2 years were spent by Milan having to clear his name of all responsibility – a feat he managed to achieve with the invaluable assistance of some of the backers of the Asylum deck, who were only too happy to help him. 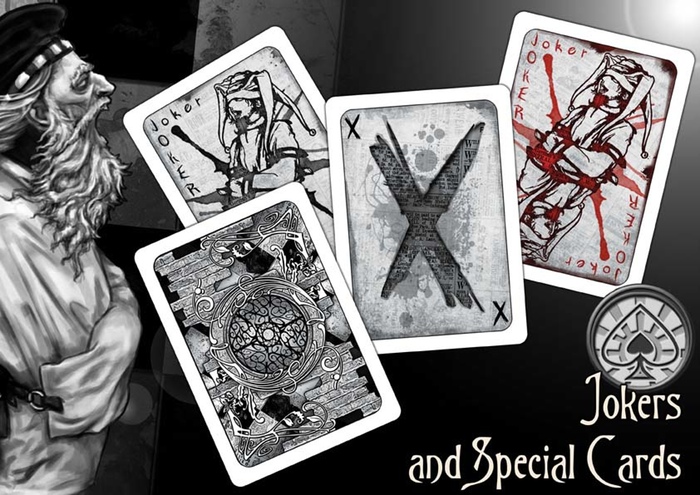 Back to the Asylum Jokers and Special Cards

Which makes what has now happened all the more soul comforting. Milan has teamed up with Roman Kotiv of NoirArts (creators of the Defunctorum, Demon and Chess decks which are all already extremely scarce and collectible) to get not only the original deck finally produced, but also a follow-up deck called ‘Back to the Asylum’. The new deck is fundamentally the same as the first deck, but 6 months was spent re-designing and updating all the artwork, adding new court card designs, and making changes and tweaks in accordance with suggestions made by backers. And as a shout out to all the original backers, and as an apology and to in some way make up for the whole debacle, there is also on offer another deck – ‘Asylum Inmate’ – which is only available to the backers of the original project. This is to attempt to “make things right and fulfill a lost dream”. I have no doubt that the original backers appreciate this gesture enormously. 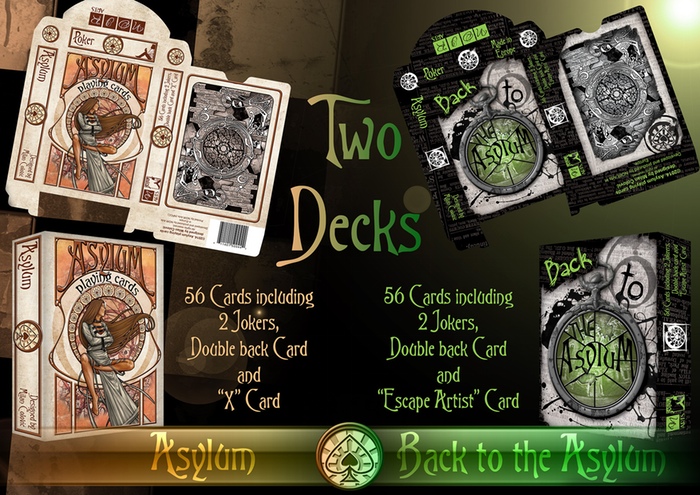 Back to the Asylum Boxes

The new project was launched on Kickstarter on 1st May 2015 with a funding target of $5000 USD. By the 5th May 2015, with 25 days still to go, funding had reached and exceeded this, in fact reaching $5704 USD. Many of the 195 backers were ‘originals’, which can only be extremely comforting to Milan. He may have cleared his name in court, but now he has been vindicated where it really matters. The new decks will not be made by USPCC but by NoirArt’s very own in-house playing card printing firm NPCC. This will give the creators complete control over production, making sure that pledges are fulfilled in a timely and hassle-free manner.

I for one, can not WAIT to get my decks. And if the speed with which the project was funded is anything to go by there are many, many more like me. I am so happy for Milan Colovic that his creation is finally seeing the light of day, and I just want to wish him and Roman Kotiv of NoirArts every success that they deserve.

If you’d like to get in on the funding for the ‘Back to the Asylum’ playing cards, you can click on the link below to take you to the Kickstarter project page. Anyone who is unsure as to how Kickstarter works can leave me a comment in the box below and I’ll get straight back to you to answer your questions.

‘Back to the Asylum’ Playing Cards on Kickstarter – click HERE

Any other comments or questions please feel free to let me know using the comments box below. Thank you for reading :)

28 thoughts on “‘Back to the Asylum’ Playing Cards – Successfully funded on Kickstarter.”