Spanish illustrator/graphic design artist Victoria Francés was a mere 22 years old when she published her first book of works entitled ‘Favole 1 – Stone Tears’ in 2003. This was followed up with ‘Favole 2 – Libera Me (Set Me Free) and Favole 3 – Frozen Light. Artwork from all three of these books is featured within this fantastic deck of playing cards.

Her work is heavily influenced by gothic Romanticism and pre-Raphaelite paintings. Images of vampires and eerie castles as well as tomb stones and moonlit woods adorn each beautiful card. Not to everyone’s taste, admittedly, but with the current obsession with anything ‘vampirish’ or gothic these cards definitely have a widespread appeal. In fact, you could have seen her work on posters and even as jigsaws.

Every card features a different work of art, which I personally love about the deck. There are 52 cards plus 2 Jokers and one Extra card (to me that’s 3 Jokers), and because each one is different you can forgive the backs of the cards for being a tad, let’s say, boring. But that’s my only criticism. There are no gaff cards and no hidden reveals – this pack literally doesn’t need any such gimmicks.

This is a deck that truly needs to be seen to be properly appreciated. I usually play at least one or two hands of cards with each of my good decks – just to show them off you understand – but this is a deck I don’t think I’d ever play with. Just in case someone handled it too roughly. In fact, this is a deck that I’d love to have an uncut sheet of, but I don’t think they’re available. What I’ll probably end up doing is framing the whole deck. Yes, they really are that stunning.

Of course this deck, being made by USPCC on Bicycle card stock, won’t let you down on quality. They handle just as you would expect from any Bicycle deck and so could be used not only in gameplay but also as part of a magician’s set, or illusionists routine.

I am happy to fully recommend the Bicycle Favole deck.

Where to buy your deck of Bicycle Favole Playing Cards:

Currently available from Amazon.co.uk so grab them while you can!!

For a wide range of Victoria Francés products including calendars, books, posters and jigsaw puzzles click                       HERE for Amazon.co.uk

or HERE for Amazon.com 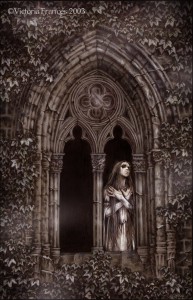