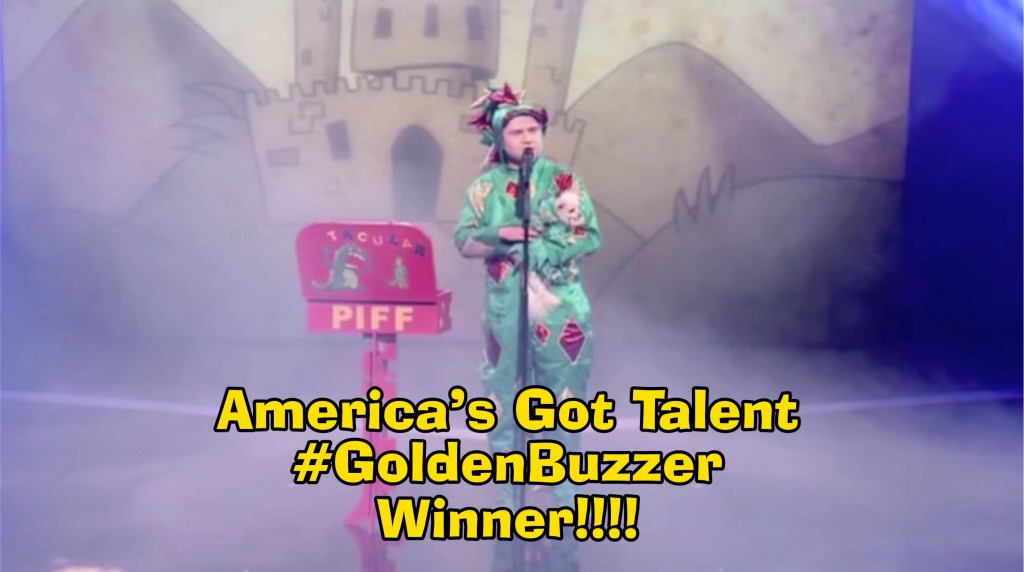 Piff The Magic Dragon on Penn & Teller’s “Fool Us” 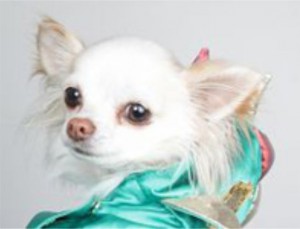 How dare you!! He is a Magic Dragon. An actual real live Magic Dragon who, together with the World’s First Magic Performing Chihuahua (Mr. Piffles) has taken the world of magic by storm!!! STORM, I SAY!!! If you’ve seen Piff The Magic Dragon (yes, you’ve heard of his older brother, Steve…) on Penn & Teller’s TV show ‘Fool Us’, you’ll know how truly remarkable (and magic) Piff actually is. Of course, so is Mr. Piffles. He’s pretty amazing too, and Piff wouldn’t be where he is today without Mr. Piffles agreeing to work with him…. (my Yorkshire Terrier, Jake, made me write that bit).

So, what does a Magic Dragon do on his nights off from performing in sell out shows in Las Vegas, the Sydney Opera House, London’s O2 Arena and a 17 date UK Tour with the Grammy Award winning band Mumford & Sons…? He designs his very own deck of playing cards of course!!  The “Piff The Magic Dragon Playing Cards” no less!!!!! ……..Well, ok, HE doesn’t design them, he gets UK designer Claire Blackledge to design them, and he gets well known playing card designer and collector Chris Chelko to create a Kickstarter project for them. Each card, from the pips to the courts, are completely redesigned from scratch. Let’s take a closer look… 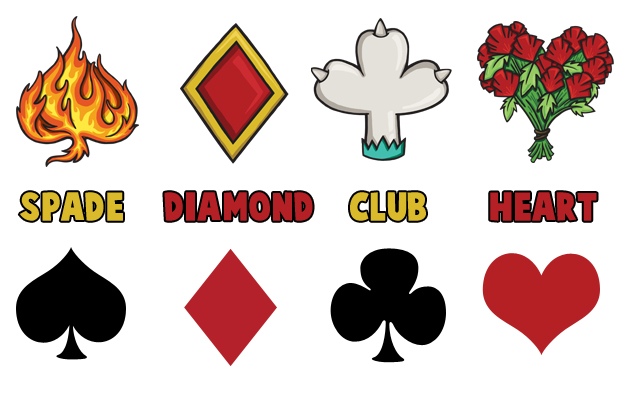 Piff has also turned the whole royal family on their heads. Of course, Piff represents all the Kings. (Hey!! It’s his deck and he can do whatever he wants. When you design your own deck of playing cards, then you can be the King. But until then, hush up, be quiet and please have a bit of respect). Gone are the Queens. Married women…? Too much trouble. Princesses…? Now you’re talking. Way cooler than Queens, and much prettier too. Except for the Queen of Jordan of course. But I digress. Mr. Piffles kindly agreed to represent the Jacks, which in my opinion makes the deck all the more amazing. (Jake, stop typing when I go to the loo!!!!) 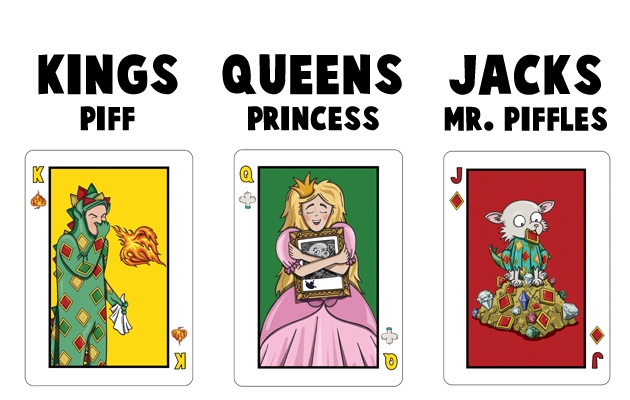 The back of the cards represent Piff’s dream home. A castle. Called PiffLand. (Personally, I’d have gone with ‘Dun Piffing’, but hey, it’s not my deck…) You see, Dragons traditionally live in caves. These can be cold and damp and although sleeping on piles of treasure is what they’re ‘supposed’ to do, it’s not at all orthopedically sound and it therefore leads to bad posture. A castle, however, would have four poster beds with memory foam mattresses, and would have fair maidens tending to Piff’s every whim with Knights protecting the perimeters on their silver steeds leaving Piff to, in turn, tend to the princesses. Or at least, that’s how it would hopefully pan out, since – for the time being at any rate – Piff doesn’t live in a castle but the aforementioned cave. 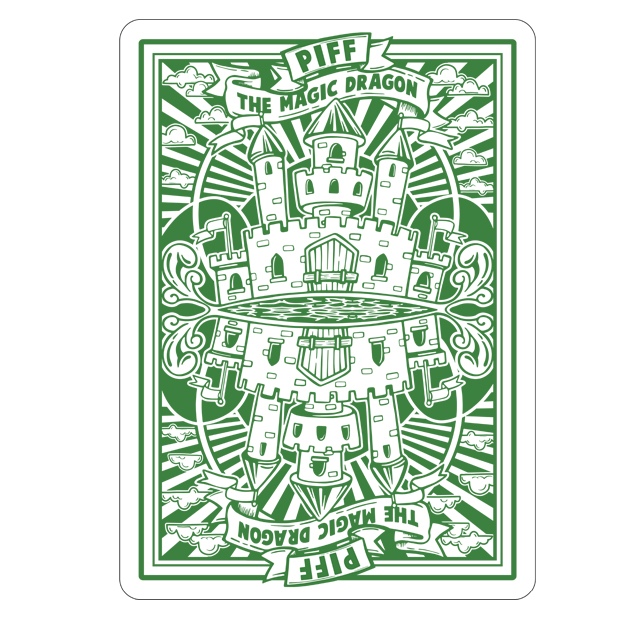 Editor’s note – You will notice how there are no helipads. This is because Piff is actually quite a modest Dragon and isn’t into material wealth and such forth. Plus, he can fly. Because he’s a dragon. So he is.

*** The Following Image Requires a Legal Disclaimer – I got my legal team {Hi Debbie!!} to contact the legal representatives of Piff The Magic Dragon and we have been assured – legally – that Mr. Piffles was not hurt in the sketching of the following Gaff Cards. ***

The Gaff Cards are quite ingenious. There are three cards which, in sequence, ‘appear’ to show Mr. Piffles being shot out of a cannon through the back of another playing card. To put your mind at ease, please note that Mr. Piffles has a smile on his face in the 10 of Diamonds, therefore reinforcing the fact that he was not hurt during the sketching process. 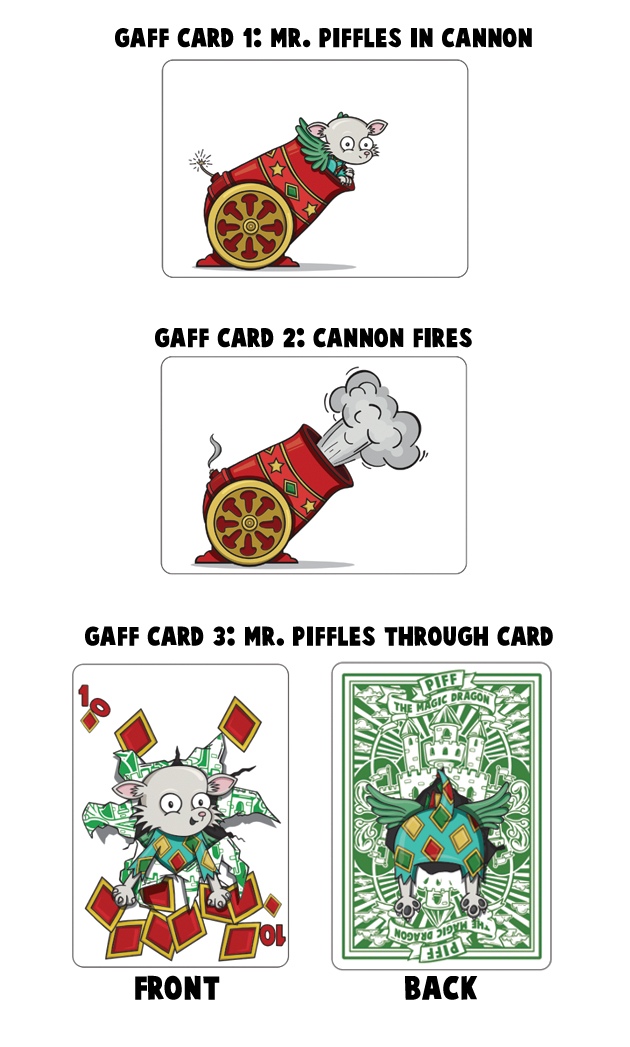 As if all this so far isn’t more than enough….!! There is also a die-cut (that’s ‘die-cut’) extra playing card that turns the every day ordinary boring tuck box into a…..

………..or ‘tuck tacular’ depending on what way you want to say or spell it. (At this point I would ask my readers to have some imagination. I personally think that TUCKTACULAR!!! has more oomph than tuck tacular, but naturally, it’s up to you in any case.)

Any self respecting Magic Dragon should (and would – cos that’s how you know the fakes) have a ‘tacular’. It’s where they keep their magic props, bananas and Chihuahuas. (Not that they need magic props, ‘cos they’re magic, so props aren’t strictly necessary, but let’s say because the ordinary everyday person in the street expects props, so they hide them there to produce at odd unexpected intervals to make said person in the street think they’re not going crazy.)

Piff The Magic Dragon has a ‘Pifftacular’ which he brings onstage with him. But. For you, in the comfort of your own home bar / man cave / den / sitting room (you know who you are..!) you can enjoy the benefits of everything that Piff enjoys at a small little tiny wee fraction of the size. And what a joy. Did I mention that it’s die-cut?

I have no reasons why you wouldn’t want to buy this deck. Let’s recap. It’s designed (kinda) by a Magic Dragon. It features the World’s First Magic Performing Chihuahua (Mr. Piffles) There are Princesses and Castles and Canon-fired pooches – why wouldn’t you want this in your collection??? What? You don’t have a collection? Well, start one!! With this deck!!!

Piff The Magic Dragon Playing Cards are being funded on Kickstarter right now, as we speak. There are 4 1days to go at this point (6th July 2015) and it’s already 1/4 way funded.

These cards will be produced by The Expert Playing Card Company so we know quality feel and handling is guaranteed. That’s right I said “will be”. Not “could be” or “should be” or “if all goes well maybe might be”. I said “will be”. Because if this deck doesn’t reach it’s funding target I will actually eat my own feet.

If you aren’t aware of who exactly Piff The Magic Dragon and Mr. Piffles are, then have a quick jook at this video. If, after that, you aren’t bamboozled by the abundance of talent and sheer charisma…. then… well…. quite frankly, I can’t help you…. adieu…..

Please feel free to leave any comments or questions in the box below and I will be only too happy to reply. Also, please do share on your social media if you feel it deserves it – just click on any of the buttons below. Hope you enjoyed this review :)

35 thoughts on “Piff The Magic Dragon Playing Cards – The PiffDeck on Kickstarter NOW!”