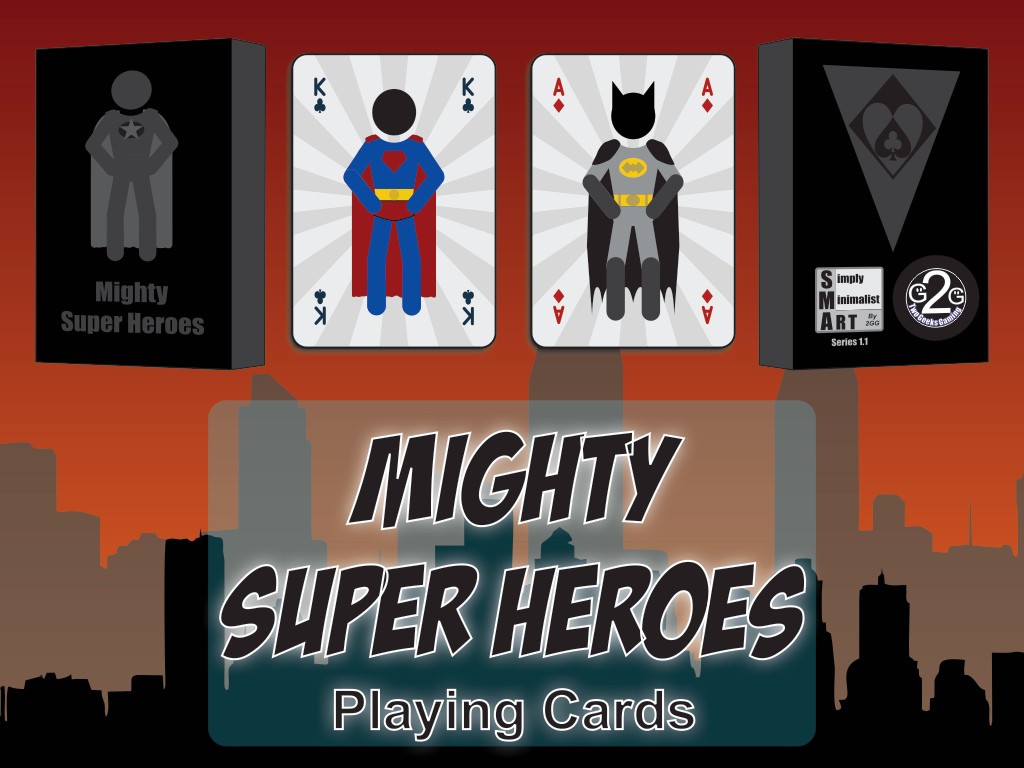 The creators of these playing cards – collectively known as TwoGeeksGaming – are Steven Fields and Greg ‘Jazzy Bear’ Brown. Their idea was to produce a series of decks with different themes, each featuring what they call SMArt – “SIMPLY MINIMALIST ART”. So, basically, looking at each character you can see what they are meant to be even though they use the bare minimal visuals. They each have as their basis a simple stick figure. Then, using solid bold colours as well as blacks and whites and sharp clear lines, these 2-dimensional figures become fully recognisable as the characters they represent.

‘Mighty Super Heroes’ is the first release in the SMArt series. The guys are planning more decks every few months which will all use the same concept but the subject matter will change. For example using Sci-Fi characters or Action Heroes. With the Super Hero / Action / Sci-Fi genres being as popular as they are – not only in comic books but also on the big screen – this is definitely going to be a successful series of playing cards for TwoGeeksGaming. And they’ll have more than enough characters to choose from. 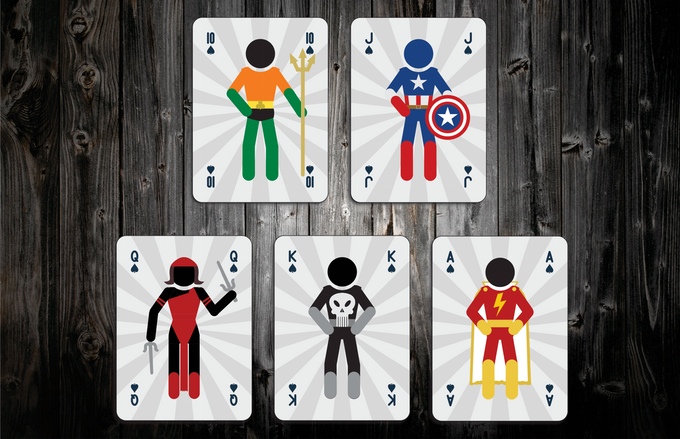 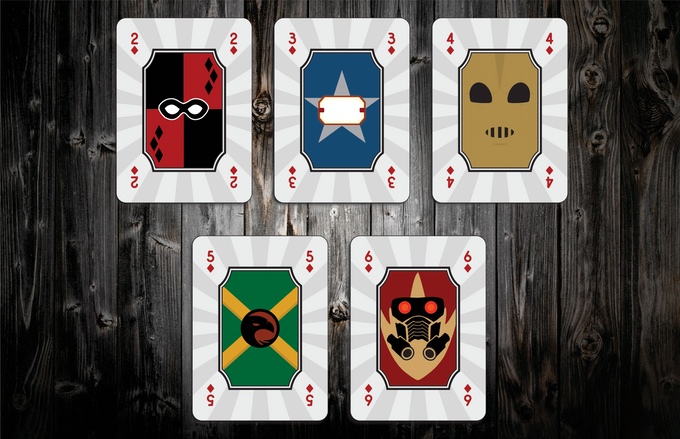 Within this deck the ‘face’ cards are 10, Jack, Queen, King & Ace. “Figure Art” is used to depict each of these cards. In other words, there is a design featuring a complete figure. Then the ‘pip’ cards – 2 through to 9 – are depicted by what is called “Element Art” – incorporating elements and attributes of a particular hero or villain, or something that represents the general feel and look of the character or costume. 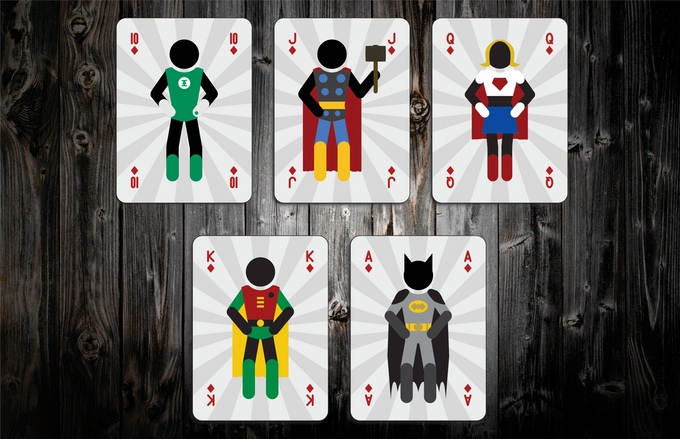 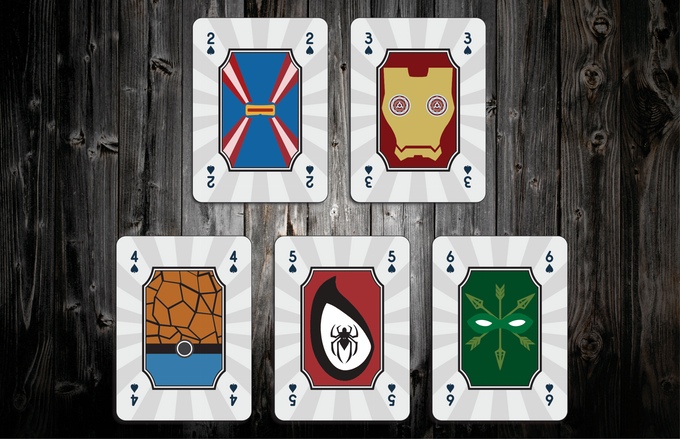 A follow-up deck to this one, if it is funded, will be the Mighty Super Heroes Series 1.2 deck featuring completely different characters. The great thing here is that all the decks within a particular ‘series’ will have the same backs, meaning that you can add to decks, double up the whole lot, or even select particular characters and come up with crime fighting ‘teams’ from each deck. 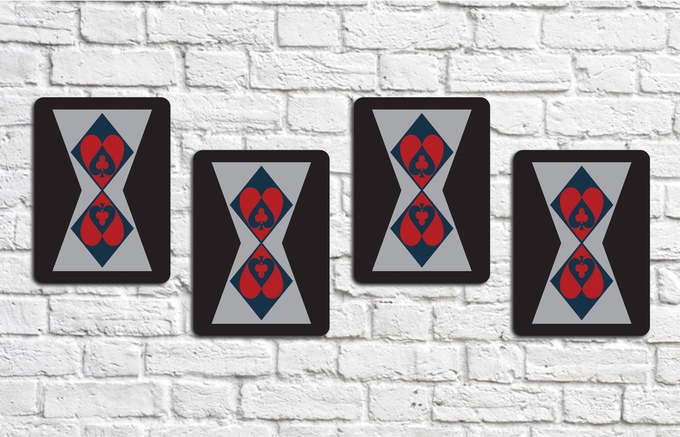 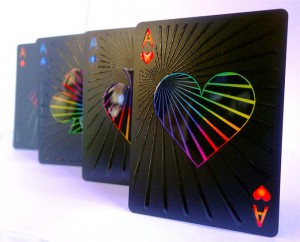 While the main deck is to be printed by Legends Playing Card Company on it’s 310gsm black core card stock with linen finish, a very limited edition of the cards will be printed by Make Playing Cards using their slightly raised glossy ink. {You can see a perfect example of this in the Prism: Night deck by Elephant Playing Cards}. Only 100 of the limited edition decks will ever be made so it’s definitely going to be a collectors item. Speaking of which, the uncut sheet is bound to be a must-have for ANY Bat Cave, sorry…. man-cave, den, bedroom, games room or loft. Get it before Sheldon does! There are never too many of those produced (usually only 100) so not only will you have an amazing piece of artwork for your wall, you also have a real investment. 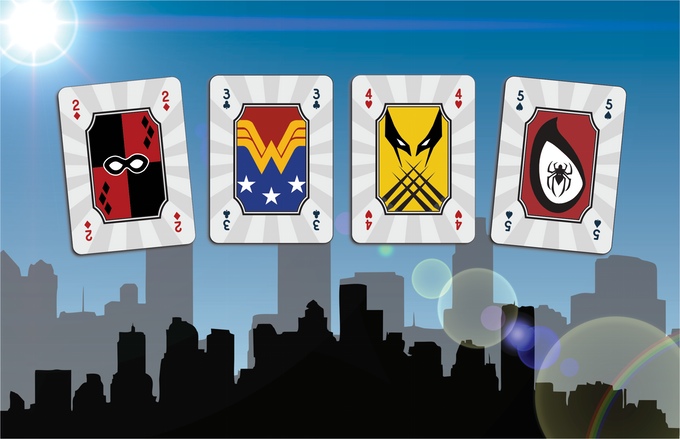 Inspired by the minimalist tuck box of Stockholm17’s Heretic Lux deck, the Mighty Super Heroes tuck box prototypes are of an unassuming skyline design in greys and blacks, and a black and grey super hero, which almost act to disguise the colours and designs on the cards inside. 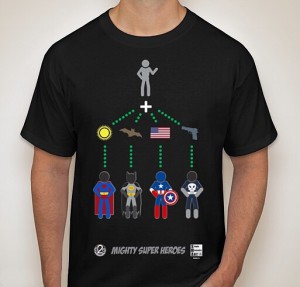 I don’t care how old you are, we all love our super heroes and villains (my favourites are Spiderman and Harley Quinn) and everyone would love a gift of one of these decks or uncut sheets. Heck, there’s even a t-shirt add-on available!

As for the playing and handling quality of these cards, by being printed by LPCC we are assured of smooth easy handling, and with the pips and indexes in all 4 corners of the cards the deck is suitable for both left and right handed players. I can’t imagine anyone who wouldn’t love to get their mitts on this deck. So if you’re wanting to add to your existing collection, or if you want to start one, grab yourself one of these decks. Because they’re going to be a one time only print run. Meaning that once the Kickstarter campaign has ended, the creators will tally up how many decks have been pledged for, and they will have a quantity printed to cover that amount with maybe only a few left over.

To sum up, this is a really well designed deck. Very clever imagery tells us who each character is by using only a bare minimum of detail, so these would appeal to design buffs as well as comic book and super hero movie enthusiasts, young and old. I’m in on the funding. Are you?

All the very best of luck with this project and the rest of the SMArt series to TwoGeeksGaming :) 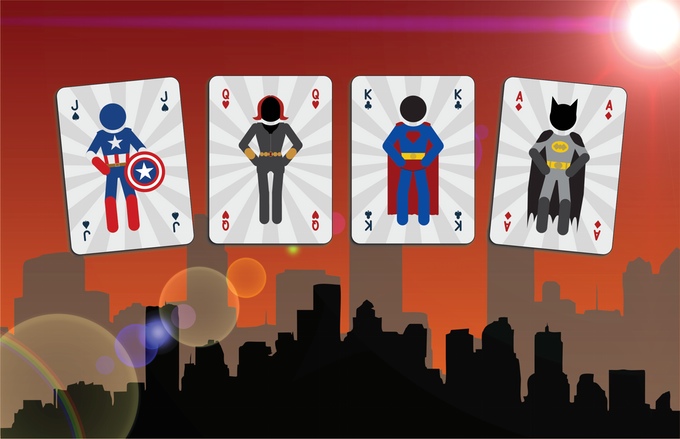 If you’d be interested in getting in on the Kickstarter funding for this deck then click HERE to be taken over to the project page. Funding closes on 16th August 2015.

As always, if you would like a brief run-down of how Kickstarter works then please read my article by clicking HERE.

Any comments or questions? Please feel free to get in touch using the box below. And if you like this review please share it using any of the following social media buttons.