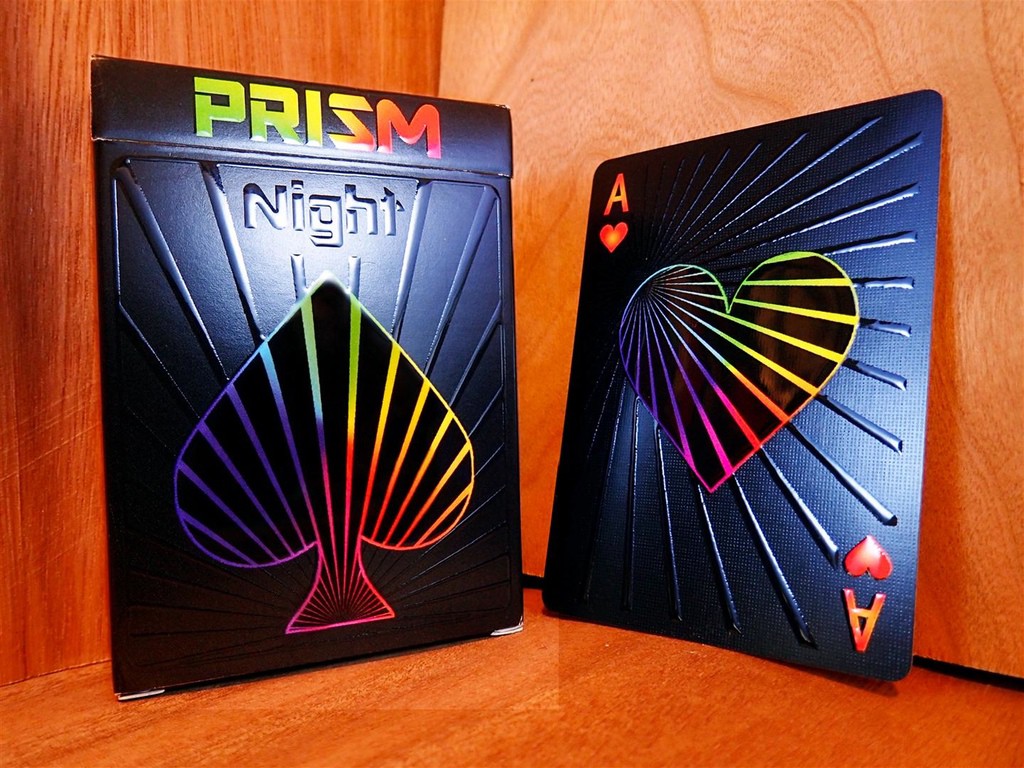 Hold on to your holly-hocks!!!! There’s a new kid on the block and he has hit the Playing Card World with full force. Ben Jones, from the very promising new Australian design company Elephant Playing Cards, has released his first ever playing card deck onto Kickstarter and it’s (as they say) a real beaut! Please allow me to introduce the ‘Prism: Night’ deck of playing cards. 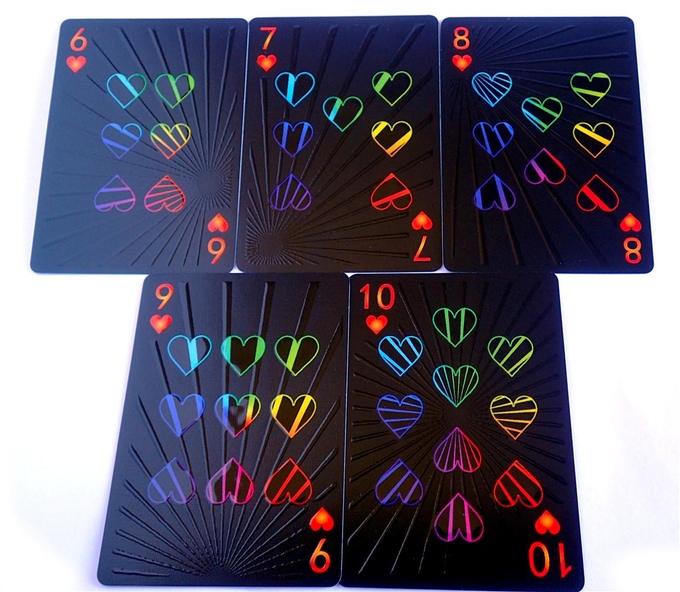 Mixing vibrant colours with jet black backgrounds, and even adding the extra luxury of slightly raised gloss ink, this deck is beautifully stunning not only to look at but also to touch. Each pip is a prism which splits the ‘light’ of the raised ink and disperses it across the pip, to exit at the other side becoming gloss ink once again. Each card has a different radial starting point making each one unique.

But instead of me going on about how amazing this deck is, Ben Jones has very kindly agreed to answer a few questions about the the idea behind it, the designs, and the methods used in creating such a unique deck. I hope you enjoy the interview, and if you love the cards then please head over to the Kickstarter project page and you could get yourself one or several decks for as little as $14 USD. 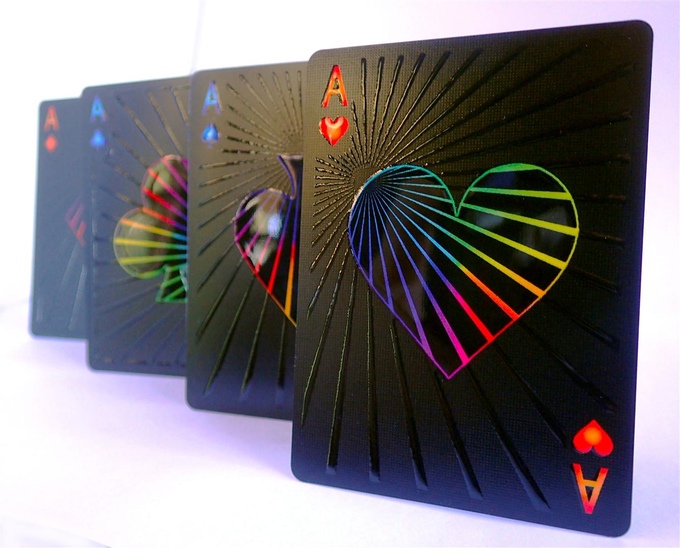 iCollectPlayingCards – G’day Ben, from Northern Ireland :) Thank you very much for taking the time to answer a couple of questions for me.

First of all, very well done on your funding so far. 7 days in and 162 backers have brought you up to 31% funded. That’s not at all bad for a first timer.

Ben Jones, Elephant Playing Cards – Hi Jyl, thanks for the opportunity to speak in this article, and thanks for taking the time and interest to put it together!

iCPC – Tell me a little about yourself and about Elephant Playing Cards. This is your first Kickstarter project, and you say that ‘Prism: Night’ is your first deck – are you a new company, or are you just new to designing playing cards? 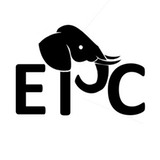 Ben – My name is Ben Jones from Elephant Playing Cards (EPC), a ‘small but passionate team of dedicated designers’. When I say small, I mean very small – it is myself and some casual collaborators who really enjoy creating interesting and beautiful things for people who appreciate them. I’ve been interested in playing cards because of how diverse the designs can be, how intricate and creative you can get with them, and how each deck has its own ‘flavour’ or character which embodies something of the designer. They also have the added benefit of being practical art – something you can use while you appreciate it.

We are a new company, and this is our first Kickstarter project. I have always had a love of creating things, and have been involved with a number of other creative projects in the past, though all are private commissions or interest pieces – nothing like a commercial venture we are trying for now.

iCPC – Lorenzo Gaggiotti of Stockholm17 freely admits that he is not a card player, cardist or magician, he just loves to design playing cards (which he does extremely well). I’ve noticed that in the ‘Prism: Night’ deck there are no ‘gaff’ or double backed cards, suggesting simply a love of design. Is this the case?

Ben – I do love playing cards, and playing with beautiful cards. Card games have a long history in my family, and I have been interested in contributing to that legacy for some time now. However, the concept for ‘Prism: Night’ came about purely from a love of design.

iCPC – I really love the cards themselves. The colours are vibrant and the black backgrounds really make the designs pop, but the raised gloss ink on the fronts – that’s definitely a very special touch. Were the cards designed with this in mind or did the idea come along afterwards? 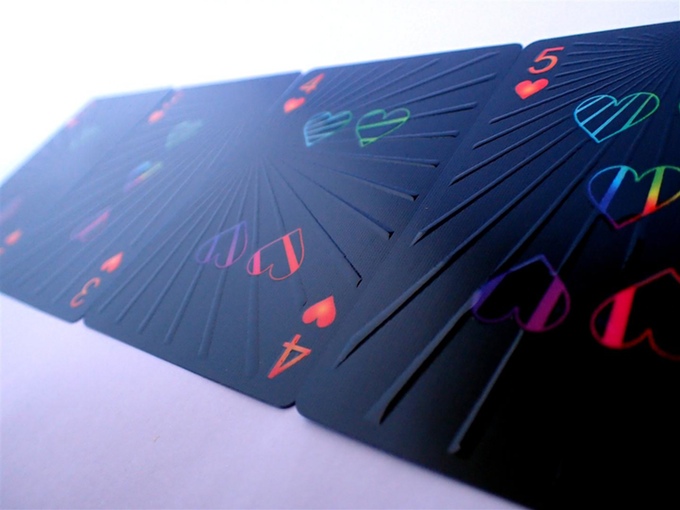 Ben – I remember seeing the MPC ‘Impressions’ deck for the first time, and thinking ‘wow, that is awesome, but they could do so much more with it’. I already had the idea of capturing the rainbow prismatic refraction of light into a design, and so I combined that with the gloss layer to create what we are now hoping to make – a beautiful combination of light and texture, colour and darkness. The colourful central symbols symbolise the splitting of light through a prism – the light is separated into its different colour components to fan out into a rainbow. Once the light has passed through the prism it reverts back to regular light; symbolised by the continuing gloss lines radiating out to the edges of the card. I think it is a really special and unique design, which is both playful and interesting, functional and beautiful. When you hold it in your hand, the light sparkles off all the different facets and angles of the gloss, catching your eye and your imagination.

iCPC – How does the raised ink affect the general ‘handling’ of the deck? ie: are they still easy to fan and flourish, or does the gloss ink make them a bit more sturdy and less ‘springy’? 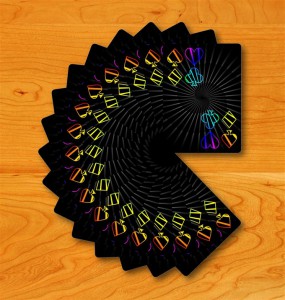 Ben – With regards to the gloss layer; the prototype was made through MPC using their ‘impressions’ technology. These cards slide over each other with no resistance at all. They shuffle and deal well, they bend without damage to the gloss and there are no signs of visible wear on the surfaces after several weeks of fairly vigorous testing. The final product will be printed by Legends Playing Cards Company (LPCC) which have an even higher level of production, ensuring an even better deck. The gloss layer from LPCC will be slightly thinner and neater than the MPC one – making its performance even better. I have commissioned a deck review which should be available in the next few days to demonstrate how well these cards handle.

iCPC – You’ve set a stretch goal of $100,000 AUD for the release of your ‘Prism: Day’ deck. Will we be getting a sneak peek of this one during the campaign, or will we be made to wait (hate that…!) until the goal is reached? Also, if you don’t hit the stretch goal, will you be launching the Day deck as a separate project at some point?

Ben – The stretch goal for ‘Prism: Day’ is set quite high for this first Kickstarter project. To be honest, I do not expect to make it to that goal (unless something incredible happens), but have put it on the table as a possibility. If ‘Prism: Night’ is successful I will be releasing the ‘Day’ version as a separate project. If we get closer to the $100k goal I will update with some teasers, but for now I’m focussing on getting ‘Night’ funded and off the ground. 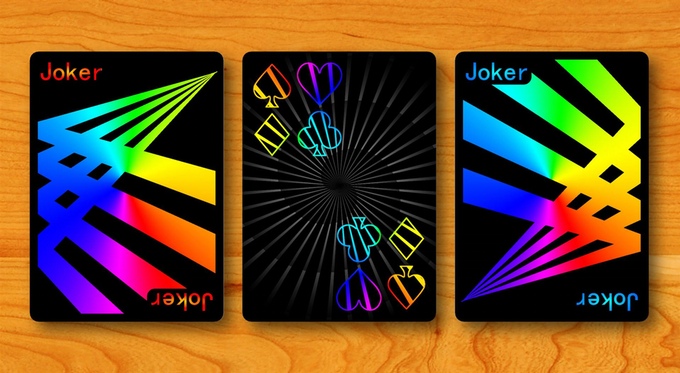 iCPC – What’s in the pipeline after ‘Prism: Night’? Have you completed, or are you working on any other playing card projects for release on Kickstarter once this project has been fulfilled?

Ben – Looking forward, I have one more deck which is currently under design to be released after ‘Prism: Night’ is funded. I call it ‘Pipmen’ (working title), and it’s a playful take on a semi-transformational deck of cards. While I am excited for ‘Prism: Night’ and really love how it has turned out, I am also looking forward to getting ‘Pipmen’ finished and out into the world!

iCPC – Thank you Ben, I appreciate you taking the time to answer these questions. And again, I do love this deck and wish you every success with it – it really deserves it.

I’m always a huge fan of uncut sheets. Check out the Prism: Night Uncut Sheet, available as part of the Kickstarter project. 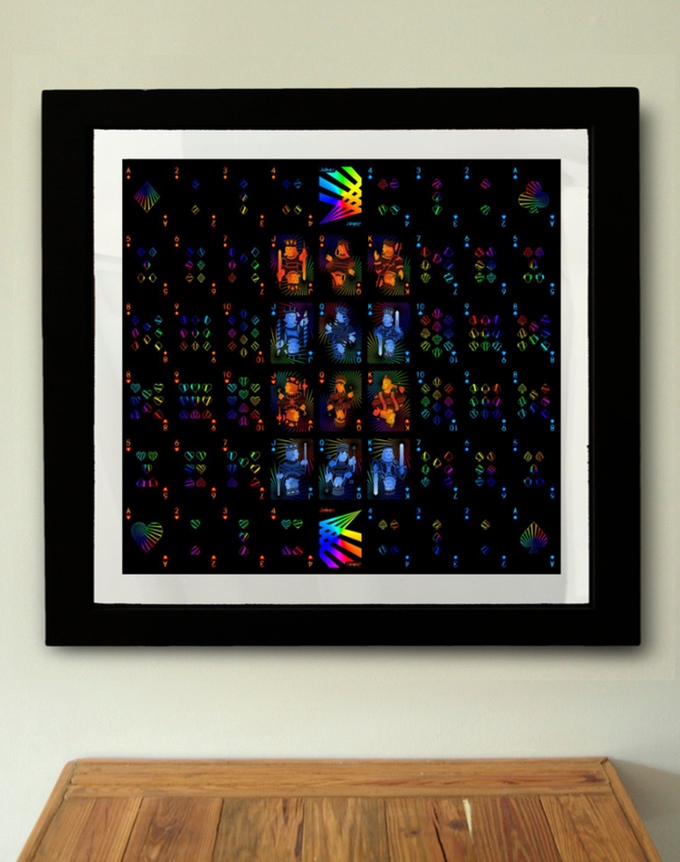 If you like this deck and you’d like to get yourself in on the funding on Kickstarter, click on this link to take you to the project page. Remember what I’m always saying – these are limited edition decks which can only go up in value, and they can be a great investment.

If you aren’t yet aware of the crowdfunding platform of Kickstarter, have a read at my ‘basic guide’ here to let you know how it all works.

Have you any questions or comments about this deck or my article in general? Please feel free to leave them in the box below and I’ll be happy to answer them.

And do please ‘share’ on your social media by clicking on any of the buttons below.