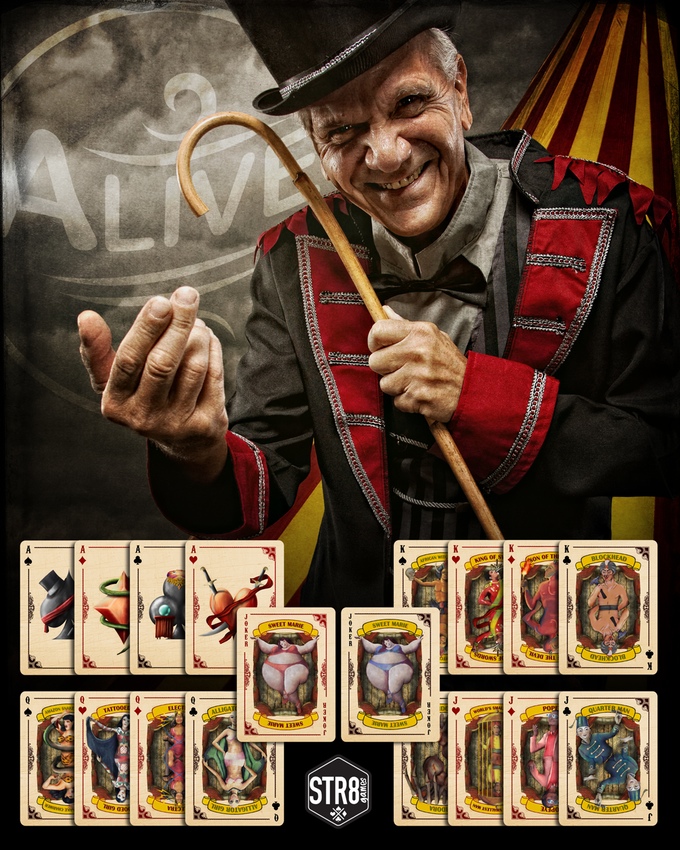 The opening bars of the song “Fairground Attraction” by the Scottish band of the same name started playing in my head when I first saw this Slideshow Playing Cards deck by Str8Games. These take you back to an era gone by where fairgrounds were bustling gatherings of all walks of society getting together to be entertained, amazed, enthralled and yes, even horrified.

Keep reading for a chance to WIN a deck of these LIMITED EDITION Sideshow Playing Cards, courtesy of the lovely folk at Str8Games.

The main attraction of any travelling fair was always the Sideshow. The heavy curtains, hiding various ‘human oddities’ often aroused the curiosity of the gathering crowds more than any other stalls. These ‘freak shows’, which have been slammed in later years as not being in the least bit ‘politically correct’, basically featured human beings with various disabilities. And all of them very much ALIVE! Patrons of the fair would pay money to see them, and “ooh!” and “aah!” and shriek in horror at the sights before them. And they kept coming back. The Sideshow was extremely popular, and so today is the artwork of the posters that advertised the shows. This deck is based on that artwork.

It has to be said that, regardless of whatever people’s opinions are of the ethics of  Sideshows, the participants have been widely applauded for their bravery in the face of adversity. Life on the road may not have been exactly comfortable for them, but it was better than hiding themselves away from the public’s often hostile gaze. It was commonplace for Freakshow performers of the 1890’s to earn £20 per week – the equivalent to £1300 today – so they are definitely not to be pitied. Of course, not all the performers were ‘disabled’. Once it was realised how much money could be made it was easy for anyone to become obese, stick thin or even to get heavily tattooed in order to jump on the bandwagon. 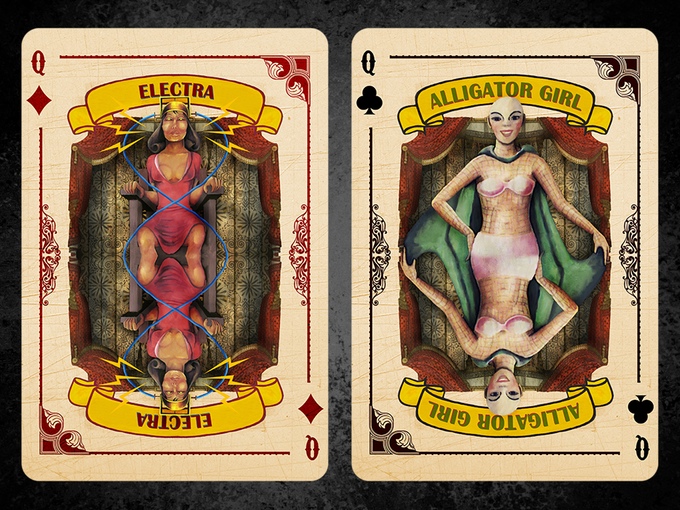 The Sideshow Playing Cards deck itself is accompanied by many other additional items for purchase – poker chips in 6 different denominations, ceramic poker plaques, uncut sheets and metal ‘cut’ cards, as well as other collectables. The artwork on the tuck box and the ceramic plaques doubles up as an entry ticket, as does the back of the deck. The artwork completely captures the whole atmosphere of those funfairs, and as I said was inspired by the posters that advertised the travelling sideshow’s various ‘acts’ as they passed through from town to town. 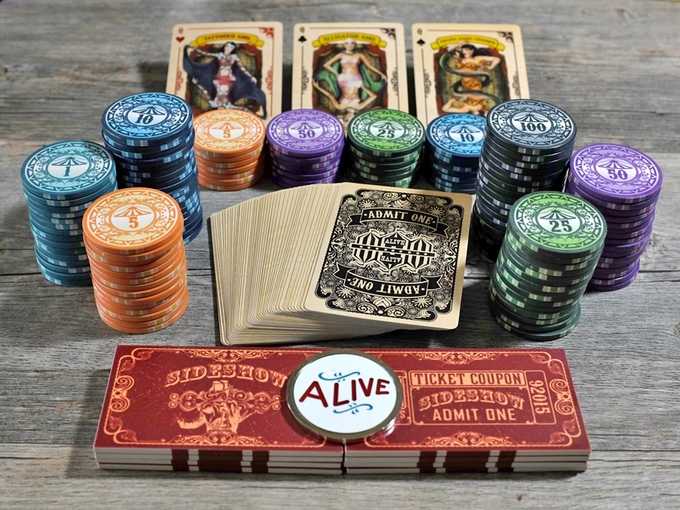 The cards have that ‘weathered’ look that gives the illusion of vintage paper and even the chips look like something that would have been used in poker games by the ‘acts’ late at night, after the show, once all the punters had left and gone home. The decks are being printed by Expert Playing Card Company (EPCC). Str8Games have definitely done their homework for their first ever playing card deck. Favoured by the likes of the amazing Stockholm17, EPCC is definitely a main contender in the playing card world, and can match USPCC in quality and finish like no other manufacturer. This is going to be a truly amazing deck. 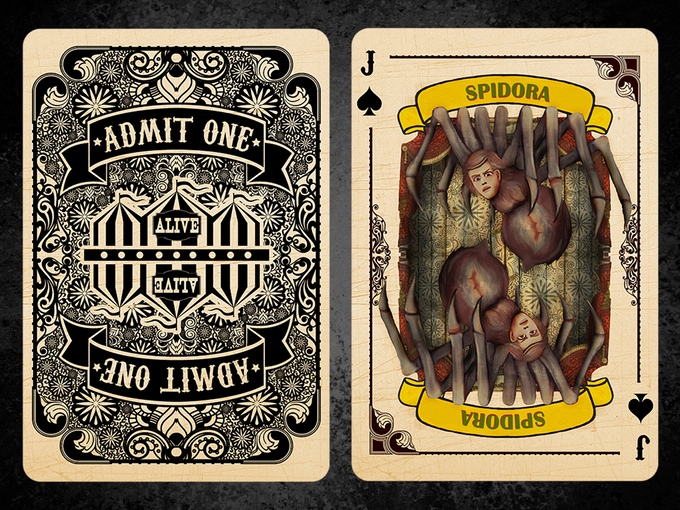 I love all this kind of stuff. Days gone by are a personal fascination of mine, and how people had to – and were expected to – live in those days can sometimes be beyond our comprehension today. So it’s important not to let this fade into the past.

The cards have been created by Str8Games, which is described as a fun, new division of Straight 8 Custom Photography.

Str8Games have very kindly agreed to answer a few questions for us. So let’s hand it over to them. Roll up!! Roll up!!!

iCollectPlayingCards – I ask everyone this, and it’s just to give me and my readers a better insight into the creators of each deck. These days more and more designers are coming up with amazing playing card designs and yet they’ve never played a hand of cards in their life, but they just love designing playing cards. On the other hand, some are poker sharps, some are cardists, magicians, flourishers etc. What are your stories?

Gina Marie of Str8Games – I’m the project manager for Sideshow and owned a poker chip company for the past 7 years. I sold it January 1st and now head the stock photography division of Straight 8. Jason (owner of Straight 8) and I have always enjoyed the game of poker and thought it would be an interesting challenge to design our own playing cards! Straight 8 deals primarily with tactical photography so Sideshow was a fun change to our daily routine! Jason spent 20 years in the United States Marine Corps and I spent 6. After retirement, Jason realized he couldn’t jump out of airplanes forever so he had to learn a trade. As a graduate of the University of YouTube, Jason taught himself photography and photoshop and the rest is history! 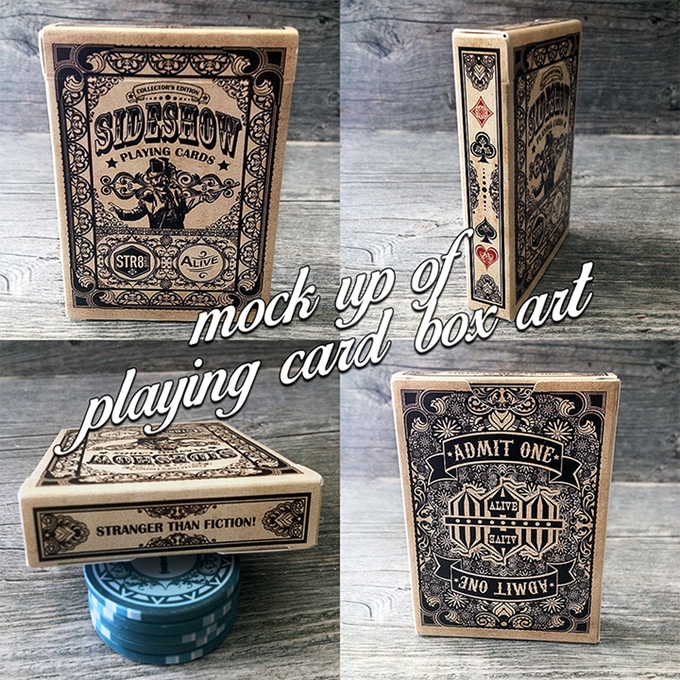 iCPC – The Sideshow, in it’s day, was truly a horrifying place to visit, and people almost challenged themselves to look upon the hideous sights before them. Why was it your choice for your first ever deck of playing cards, as opposed to… oh I don’t know… say, artillery or something?

Gina – How did you guess our next deck? :) I read a book about Sideshows and was hooked. It’s not necessarily the attractions that intrigued me, it was the marketing. Big, bright banner art that lures you in and a fast talking “barker” practically taking money out of your hands with his charm and wit! Ultimately, the Sideshow talent never lived up to the hype but it was just odd enough to make it all worth it!

iCPC – Apart from maybe Spidora (which was probably done with mirrors anyways) you haven’t chosen any really ‘over-the-top’ characters for this deck. Was that a conscious decision, and what was the process taken to decide which characters WOULD be featured?

Gina – I researched Sideshows and read stories of talent that were frequently showcased. You’d start to feel bad that someone would gawk at another human being put up on display. The talent would argue though that having a sense of purpose and a way to make a living with their condition was all that mattered. They were a family of oddities but in the end, don’t we ALL have something odd about us? :)

iCPC – On your Kickstarter page there is an image of Julian Faylona busy working away at the designs. I know that the designs were based on posters that were issued back in the day, but how much work needed to be done to each to create each card?

Gina – We had a lot of fun designing the cards! Rough sketches and lots of back and forth brainstorming got us to our final designs. Julian made everything look polished and perfect. I’ve worked with a lot of designers over the years with my poker chip company but Julian has a work ethic that’s unmatched. The UnitedCardists.com forum held me by the hand, giving me guidance and feedback along the way along with Mr. Boyer from the PlayingCardForum.com Both websites want you to create your best deck possible for the love of cards and the game.

iCPC – What’s next for Str8Games? Will there be more playing cards and if so, what topics are you wanting to cover? If you’re casting your net wider than the playing card field, what will you be targeting?

Gina – With our background, it’s hard not to gravitate to guns and weapon systems for our next deck! :) Our 3rd issue of Red-Bloods.com debuts this January so it’s been pretty nonstop here between the cards, work and our comic book! I’d love to do something crazy with playing cards that you’ve never seen before for the next project. There are so many talented artists on Kickstarter though, that might be hard to accomplish!! I can’t tell you though how kind all our backers have been right from the start. Their motivation keeps me on track! The thought of my playing card deck being in someone’s home is just mind blowing! Kickstarter is a roller coaster of emotion and I can’t wait to see if we’re a success!!!!! (fingers crossed)

A huge thanks to Gina and the guys at Str8Games for taking the time to answer our questions.

WIN ONE OF 12 DECKS OF LIMITED EDITION SIDESHOW PLAYING CARDS!!!!

Str8Games have very generously given us 12 decks to GIVEAWAY. To be in with a chance to win one, just leave a comment in the box below telling us which character from the whole deck is your favourite and why. Also, please share this post on your social media sites by using any of the buttons below.

As always, thanks for reading :)