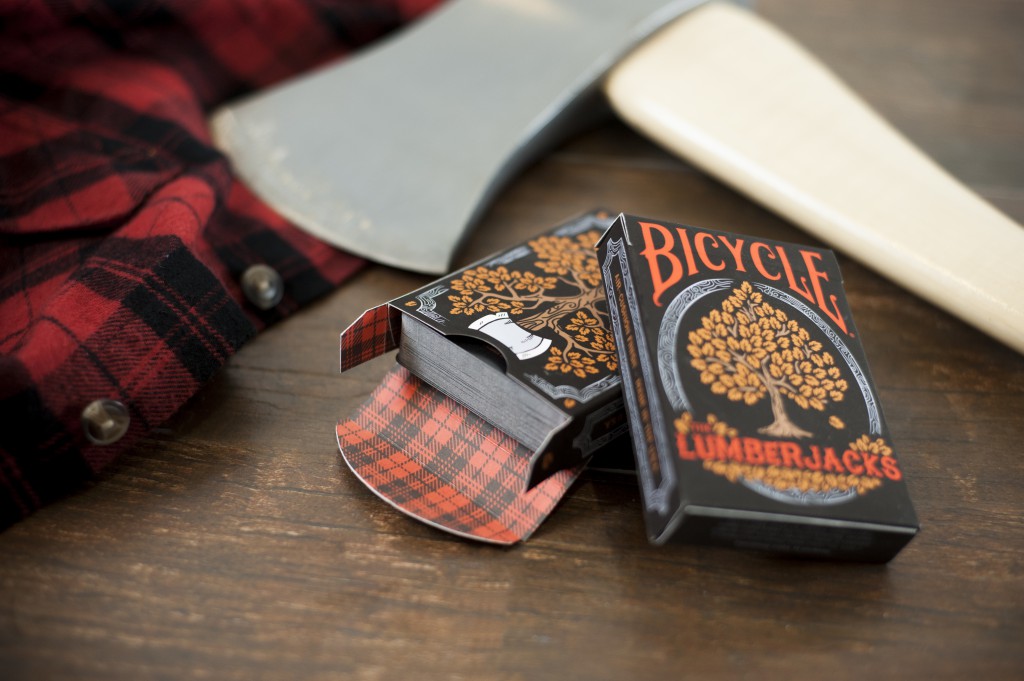 Bicycle branded The Lumberjacks Playing Cards 2nd Edition are being funded on Kickstarter NOW! Click here to be taken to the project page.

Usually, when something is described as being a ‘2nd Edition’ we presume that it is simply an updated, slightly moderated, the-odd-tweak-here-and-there version of the ‘1st Edition’. Well, it has to be said, not with this deck. ‘The Lumberjacks’ 2nd Edition Playing cards by Baltimore based Vadim Smolenskiy may have the same theme as the 1st Edition. They may be Bicycle branded like the 1st Edition. They may be printed by USPCC on their Air Cushioned Finish card stock, yes, you’ve guessed it, just like the 1st Edition. But….. in my opinion….. these are a completely different animal to the first deck. Worthy of being their own ‘1st Edition’ in fact.

But I can see where Vadim is coming from here. He clearly has a passion for the lumberjack trade and history. The deck is full of imagery and little nods throughout to the art of felling trees using nothing more than axes, saws and good old fashioned hard graft. I’m presuming that after completing the first deck, and getting it successfully funded on Kickstarter, Vadim looked at his creation and – as we ALL do – thought about what he could have done differently. Not necessarily to make it ‘better’. But little points here and there that were maybe left out or not done quite to the full effect that he’d have liked. {Like I say, this is my presumption… I’m sure Vadim will let me know if I’m wrong ;) } And so, the 2nd Edition deck was born. 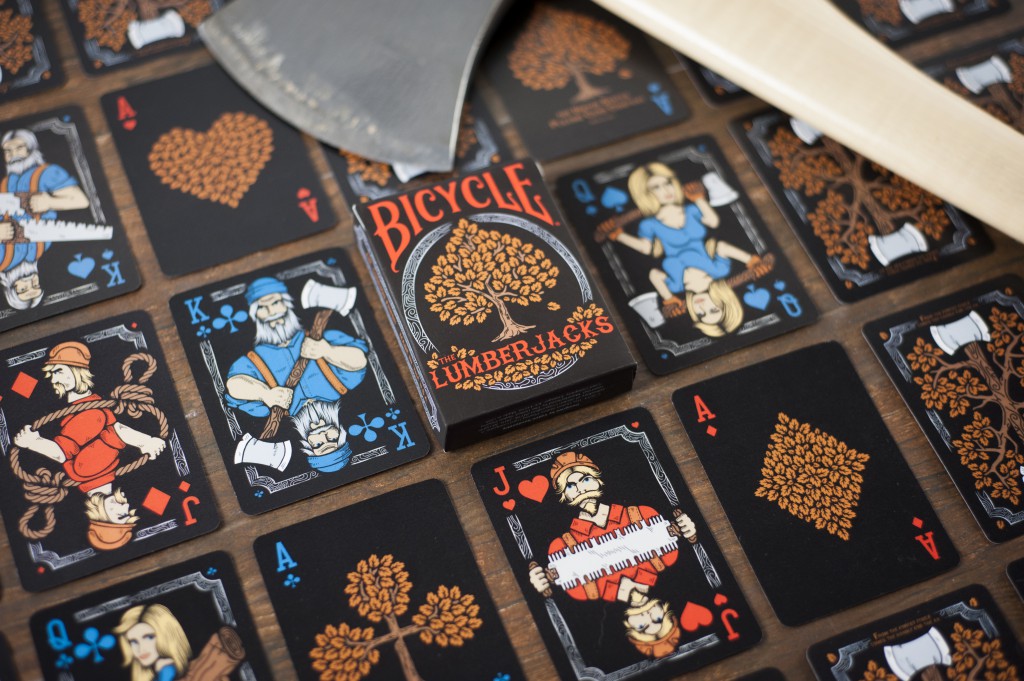 With pure black backgrounds and luminous reds and blues throughout, this solid deck is the embodiment of strength and robustness. The design on the inside of the tuck box is the ever recognisable ‘red plaid’, representing the shirts that we all associate with lumberjacks. Trees and leaves, saws and axes, even Butterfly knotted ropes all feature in the designs on both the fronts and backs of the deck.

The 4 Aces have all been designed from scratch. Each one representing either trees yet to be felled (the Aces of Spades and Clubs) or the leaves that have been stripped from the trees which have already been chopped down (the Aces of Diamonds and Hearts). 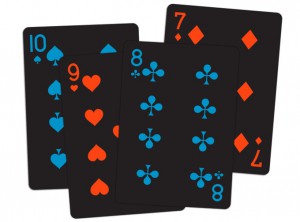 The pips are all standard with just the Clubs veering towards the traditional German style design. This is all that is needed for this deck, because there is so much detail in the court cards, Jokers and Aces. Delving into the thinking behind the design of each face card we can see just how much work was put into The Lumberjacks.

Firstly, we have the Kings – the elders of the community. The guys who have been doing this since they were in nappies (hey… I’m from the UK), who have probably come within a hare’s breath of death more than a few hundred times, and who tell the stories to anyone who will listen. The Jacks – the young upstarts who appreciate how it ‘used to’ be done, but know there’s a safer way (hence why they all wear hard hats). And the Queens – each one a symbol of strength in her own right. Given such a masculine, hardy, strapping occupation as lumber-jacking, it’s good to see Vadim has included strong female characters in this deck.

Many (many!) years ago, the men went out to the forests for months on end to do their work. The women did not accompany them but stayed at home until their husbands, sons and fathers returned. As I’m sure you can imagine, with a camp full of men, there wasn’t much of this ‘going down to the river to bash your overalls against a rock’ nonsense, so the camp would get a tad niffy. This lack of personal hygiene only served to encourage illness and lice infestations were rife. This all changed, thankfully, when the families of the workers were able to move out and set up homes and schools, and eventually whole communities were formed around the industry. Naturally this resulted in the women helping out. It may have only been moving the timber once it was felled, but it was invaluable and much appreciated.

Two of the Queens therefore depict these ‘helpers’ – the Queens of Clubs and Diamonds. The Queen of Hearts, naturally, is depicted as a tree-hugger who is probably more concerned with conserving the trees than chopping them down. (I imagine SHE wasn’t too popular in camp…!) Then of course you have to have the ‘rebel’ Queen – The Queen of Spades. Who is shown yielding an axe. I can imagine her marching out into the forest yelling orders and insisting that she’s as good as any of the men, and “no I do not have any clothes to wash!!” 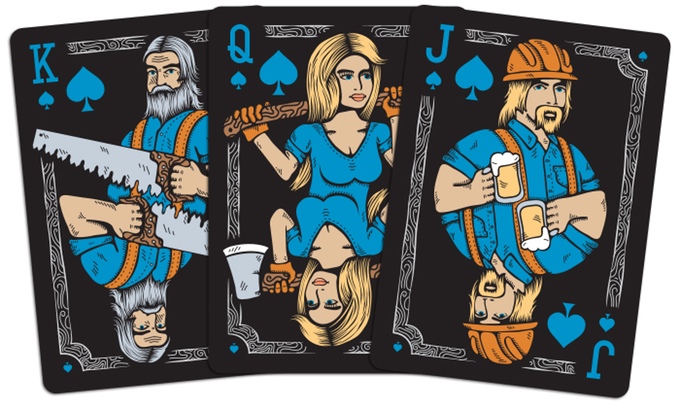 An interesting touch here, is that the Jack of Spades is the only Jack (or indeed any character) holding a pint of beer, not a tool. It would seem that the Queen has taken it off him. Now, I’m not sure whether the Queen took his axe so he decided to have a beer because he couldn’t work, or whether he couldn’t work because he had been drinking and the Queen decided to step in. Either way, for many years, my favourite playing card after the Joker has been the Jack of Spades. And I also like beer…. So this particular part of the story made me chuckle :)

To contradict this though, the Jack of Spades is also depicted as one of the ‘diptych’ Jokers (basically, an image split in two to form 2 different images, but when joined together then creates one – I had to Google it..!) He is using a 2-man saw which is no mean feat, so I like to think that he is an extremely hard worker who simply deserved a well-earned pint. Like me. 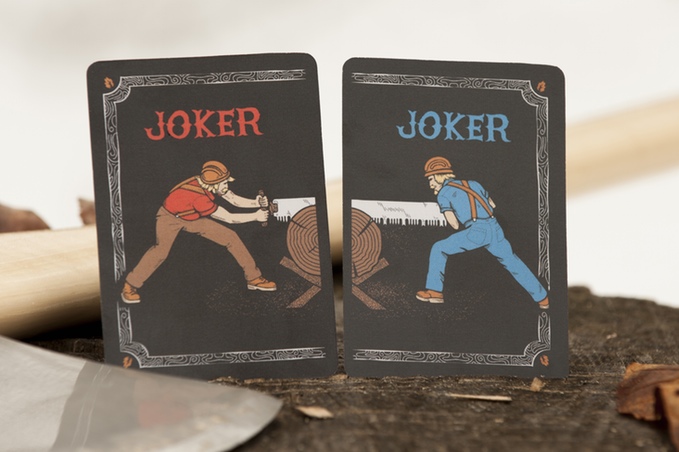 This deck is full of ‘oh! I hadn’t noticed that!’ moments. Including the King of Hearts, who is carrying an axe. This seems perfectly logical enough, you might say, since he is a lumberjack. But traditionally the King of Hearts is known as the Suicide King due to the fact that he appears to be stabbing himself in the head with his sword. This, however, was simply a result of poor copying by card makers. The King used to be holding an axe across his shoulders, but – somehow along the way – it lost it’s head and became half a sword. The 2nd Edition Lumberjack deck gives the King of Hearts back his axe. And he wears it with a venerable stance. I certainly wouldn’t cross him..!

All in all this is a really sturdy deck. It is a strong bold theme, depicted in strong bold colours, with strong bold characters. As a 2nd Edition it definitely stands out on it’s own as a solid 1st Edition. As it’s only being funded on Kickstarter now, I can’t personally say how it feels and handles. But with the USPCC Bicycle card stock and the Air Cushioned Finish, it’s pretty much guaranteed to be a joy to handle. There are 2 Jokers and 2 gaff cards – one a double backer and one with the same red plaid as the inside of the tuck box – great for magic routines.

As with the vast majority of Kickstarter funded decks, this will be a limited edition print run – only 2500 will ever be made. That means this is a highly collectable deck.

If you’d like to get in on the Kickstarter funding of the Bicycle branded The Lumberjacks 2nd Edition Playing Cards, then just click on this link – but hurry!! – there’s only 18 days to go. Oh, and check out the uncut sheets. A must for any lumberjack wannabe’s man cave :)

What do you think of the Lumberjack 2nd Edition deck? Please leave any questions or comments in the box below and I’ll be only too happy to respond. Also, please feel free to ‘share’ this post on your own social media sites by clicking on the buttons below. Thanks :)